There is only so much HDD and balcony birding one can do during this CB period. With the release of the 2020 edition of the Birds of Singapore Checklist, I decided to go through my list of 359 species to date to see how many bird family “grand slams” (of 5 or more species) do I have. If you are doing this as well, do let us know what your “grand slams” are.

A magical place inside CCNR.  How insignificant are we? Photo: Glenda Heng.

Not that many as it turned. Only 11 out of a total of 26 families with 5 or more species in it. I was missing the Little Green Pigeon for the 14 Pigeons and Doves Columbidae  family. But now with the acceptance of the Oriental Turtle Dove, a national first, it will be that much harder to complete.

I though I have the  12 Rails and Crakes Rallidae family done and dusted but found out that the Eurasian Coot, a stray last seen in 1988, is in this family. Arrrrh……

Thanks to Francis Yap:) I “lost” the 13 Bulbuls Pycnontidae family when he photographed the Black and White Bulbul at Jelutong Tower in 2012.

A big thank you and shout out to all my friends, past and present for the timely alerts and help. Many of you will recall the happy memories of when we got these species together. Special mention to all my mentors and my long time birding friends Alfred Chia, Kenneth Kee and Yang Pah Liang for being with me in this journey since the early 1990s. These are the stories of the sighting of the last species of each of the eleven families.

It was a late afternoon phone call from Vincent Ng that an Indian Pond Heron was seen at Bidadari Cemetery. Joseph Tan had photographed it on 11 April 2015 but did not processed it until Er Bong Siong posted his a week later. It was subsequently identified by Francis Yap. Link. Our first record was from Senoko on 20 March 1999 by Lim Kim Seng and Lim Kim Chuah. It was listed in Category D ( Wild birds but possibility of released or escaped cannot be ruled out). Since then, we had 8 more records from Farmway 3 in 2012 and 2016, Bidadari 2015 and 2018, Bishan Park 2018, Jurong Lake in 2019, Windsor Park and Transview Golf Course in 2020. This should not be a difficult family to complete. 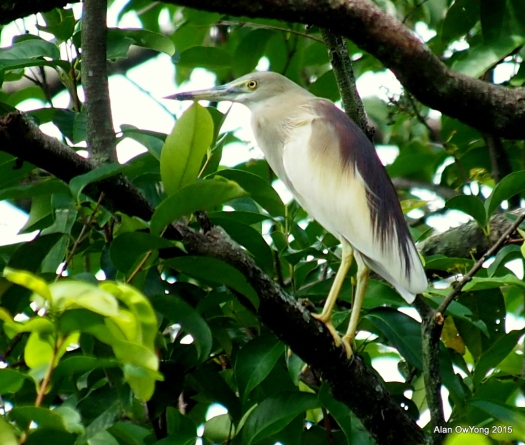 The first Indian Pond Heron seen in Bidadari in 2015.

I was late to tick the Grey-headed Lapwing at SBWR on November 2011, found by Lim Kim Chuah. But when news that one was scoped inside Kranji Marshes on 23 October 2016, we went running in to the tower to look for it. I remembered missing it by 5 minutes as it flew over the open field outside the Marshes. Geoff Lim and I decided to drive into Harvest Lane to look for it. We flushed it just after we got out of the car. For most the Common Ringed Plover will be your nemesis in this family.

The last cuckoo was supposed to be the Lorong Halus’s Jacobin Cuckoo in 2015 but a female Asian Emerald Cuckoo turned up at Siloso, Sentosa in late December 2017 changed that.  Link . Topping this was our third record and this time an adult male in its full brilliance found by Kelvin Ng and friends on 23 March 2020 next to the Ulu Pandan Canal behind MOE Ghim Moh.

The adult female Asian Emerald Cuckoo was much easier to identify than the first juvenile female photographed by KC Tsang in 2006.

January 2016. Another late afternoon phone call this time from See Toh that almost knocked me off my seat. A juvenile Barred Eagle Owl was spotted again at the car park at Bukit Timah NR. I missed the last appearance as I was away and was glad to have completed this difficult family which has the vagrant Short-eared Owl, Northern Boobook and the most sought after Brown Wood Owl in it. I had an old entry in my notebook of a BEO sighting on 16 Nov 1996 near the summit of BTNR during a survey, but I do not have any strong recollection of this sighting.

The migrant Black-capped Kingfisher is known to be super skittish, secretive and hard to find here. Most of the old records were from Pulau Ubin, hidden in between the mangroves. That was where I got mine. For many of the birders it was the most wanted kingfisher. Most should have this family grand slam by now with the Ruddy Kingfisher ever presence at Kranji.

I was lucky to be birding when the White-bellied Woodpeckers were still around. Then the former resident Great Slaty Woodpecker made a spectacular reappearance on May 2018 at BTNR. But it was the Buff-rumped Woodpecker that eluded most of us until Adrian Silas Tay found one at Pulau Ubin on May 2019. Good thing it stayed around long enough for us to tick it.

This male Buff-rumped Woodpecker stayed around the same patch at Pulau Ubin.

The rare forest wanderer, Blue-rumped Parrot numbers have remained small all these years. They can be seen flying across the Central Catchment Forest in small flocks on good days. It was only the discovery of a fruiting Star Fruit tree at Venus Loop that we were able to see them close up. This should be an easy grand slam for all.

None of us expected to see an Indian Paradise Flycatcher here as it was not their usual wintering range. But Oliver Tan photographed one at SBWR on 2 December 2017 which was later identified by Dave Bakewell. Link. Our second and third records the following year were at SBWR as well.

The identity feature of this Indian Paradise Flycatcher is the long crest.

Both martins in our Checklist were hard to find, Surprisingly I got the rarer Asian House Martin before the more common Sand Martin. Both can be easily overlook unless you pay attention to any flocks of flying swallows. 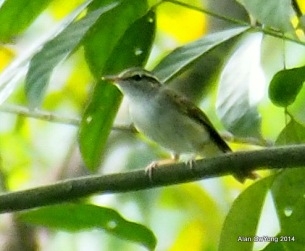 The Dusky Warbler would be the missing warbler for this family for most but I was around when Peter Kennerley mist netted one at Tuas in 1994. Instead my warbler to complete this family was the Sakhalin Leaf Warbler that was heard calling along Dairy Farm Loop by Lim Kim Keang on March 2014. We had the Pale-legged Warbler in our Checklist, but the sub song was clear enough for us to replace it.

Sakhalin Leaf Warbler replaced the Pale-legged Warbler in our checklist.

This is an easy family to complete as all the 6 species are our common residents. Among them the forest edge Rufous-tailed Tailorbird was the hardest to find and photographed for some time. But their presence at Dairy Farm and Venus Loop made it much easier now.

This Rufous-tailed Tailorbird was photographed along the railway track at Wessex Estate.

Craig Robson. The Birds of Thailand and South-East Asia.