“Here we go around the Mulberry Bush

Here we go around the Mulberry Bush

So early in the morning”  A Children’s Song.

It is more than a Mulberry Bush at the Dairy Farm Nature Park that is attracting many of the frugivorous birds for the past two months. It is the White Mulberry Tree, Morus alba, a native of China. It is a fast growing tree cultivated in China for its leaves to feed the silk worms. It has adapted to the tropics turning into an evergreen here. It soft berries are sweet but bland and a favorite with the flowerpeckers and starlings.

A female Asian Fairy Bluebird bending over for a ripe berry.

Over the months more than a dozen forest, woodlands and garden species have been seen feeding on the fruits of this tree.  Even some generalists like the leafbirds and fairy bluebirds were attracted to the white berries.

A juvenile Greater Green Leafbird, a generalist likes the sweet berries as well.

So far four species of bulbuls have been photographed feeding on the berries on this tree. The Yellow-vented, Cream-vented, Olive-winged and Black-crested. Both the Blue-winged and Greater Green Leafbirds were frequent visitors, but no signs of the rarer Lesser Green Leafbird. 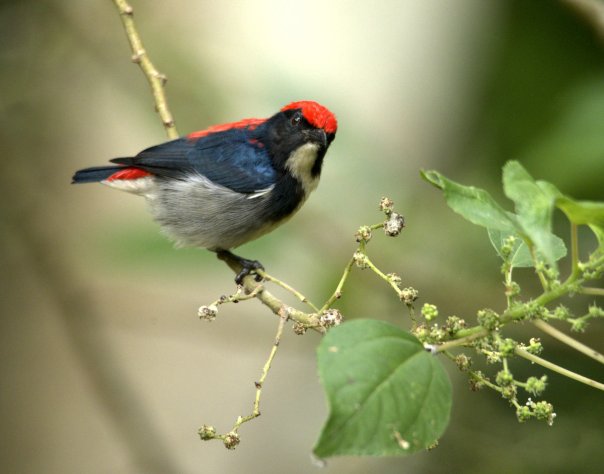 A bit of the habitat shot of the White Mulberry attracting the garden and parkland Scarlet-backed Flowerpecker.

The forest specialist Orange-bellied Flowerpecker is more aggressive of the two, often chasing away the Scarlet-backed Flowerpecker for intruding into its habitat.

The more common species like the Javan Mynas, Pink-necked Pigeons and Black-naped Orioles did not seem to like the berries as much as the figs that is available elsewhere in the park, but they will still fly in for a bite or two. I have yet to see barbets or squirrels feeding on them. The Long-tailed Macaques did seem interested at all.

For the photographers the tree’s small size and the low branches offered perfect opportunity and easier shooting of some of the less common forest birds.