Min Jiang estuary is about an hour’s drive west of the Fuzhou’s city center. In the summer, the world’s rarest tern, the Chinese Crested Terns made their way from their breeding grounds at Matsu Island to the estuary to perform their courtship and mate. There are only 50-60 breeding pairs clustered at two islands off the Chinese coast. 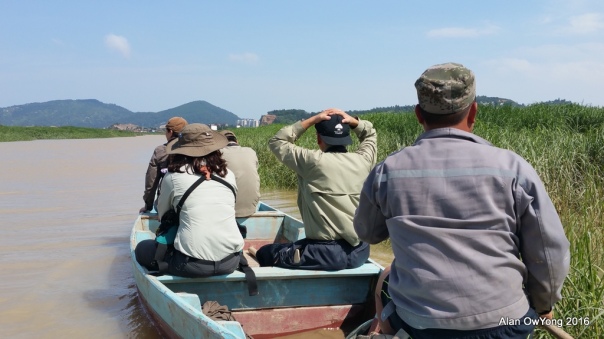 A short boat ride took us to the mud flats.

Our two intrepid ladies Ping Ling and Ju Lin rearing to go but not knowing what lies ahead.

It was raining when we got there at noon. The only shelter were these reeds and our tiny umbrellas. Luckily the rain stopped after 2 hours.

The Chinese Crested Terns flew in after two hours wait. It was both a relief and excitement for us. Menxiu, on the scope was also a relieved guide.

Alfred washing the mud off his wife’s leg after the muddy ordeal. Surprised none of us slipped and fell.

The Chinese Crested Tern was one of the top targets of the trip. It was also the hardest. The mud flats were quite extensive which means that we have to trudge through ankle and sometimes knee deep mud to get to the coast. The wet weather did not help.

Chinese Crested Tern has a black tipped bill and a black forehead during breeding.